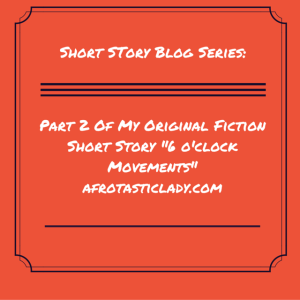 Benjamin was glad that he liked his brother-in-law. When Benjamin first met Jeremiah, Jeremiah was quiet and frowned at him like he was an expired piece of food. A month later, Jeremiah informed Benjamin that Asha had a challenging break-up and he did not want to see Asha endure sorrow with another man. Jeremiah described Benjamin as “good peoples” when he discovered that Benjamin had prayed about Asha before he asked to make their relationship serious.

“Let me see what these people want,” Benjamin dialed his voicemail.

“Ben. Benjamin, where are you? You’ve been gone for a while, and the kids are asking about you. You just walked out of the house. Like you didn’t care or something. I know you’re tired. You’re angry. I guess you’re angry at God. I don’t know. God’s done a lot for us. He’s been helping us but I don’t think you see that. I don’t know Ben. Just bring yourself home,” Asha pleaded on the voice message.

“Hey man, it’s Jer. Asha’s worried about you. She called me, crying. Said you ran out of the house after a fight. You know you can talk to me, man. It’s irritating, I get it. But you can’t be acting how you acting right now. Alright…call me when you get this message,” Jeremiah said on his voice message.

“Daddy. Daddy. I wanna play Leggos with you. Julian made you a house. A big house. We want you to seeee it,” Gabriel, his five year old son whined.

By the fourth message, Benjamin had closed his eyes.

“Benjamin, did you get my last message? I called you. Did you forget that you have kids? They are over here. They asking me “Where’s Daddy?” I don’t know where Daddy is. I don’t know why you won’t call me back. I don’t know why you ran outta the person like some crazy person. You’ve been gone since 9 this morning. Ben… God’s got us. He’s been got us,”  Asha’s voice sounded softer, and she was sniffling.

Asha. His brown woman. His wife who wore a pink,pixie hair cut. Benjamin was raised on Southern Gospel music like The Blind Boys of Alabama but when he met Asha, he learned to like her Christian metal music. He did not even know that brown folks liked metal music.

He remembered when Asha wagged her finger and said,“You know what? Black people need to step out of their comfort zones and listen to some other stuff. I like Gospel like you, but I also like metal. I’m still Black, boo.”

Benjamin laughed at the recollection. Then, he looked at his phone. The screen displayed that it was six o’ clock.

“I’m hungry, “Benjamin placed his hand on his stomach. His stomach was plumper than before. Benjamin usually heard the cliche comment “You look like a basketball player” when people looked at his tall and muscular body. With his ravenous eating and lack of exercising, his muscles were transforming into mashed potatoes.

Benjamin realized that Asha served dinner around this time. He enjoyed eating her home cooked meals, especially her vegetable lasagna.

Call your wife, Benjamin heard. Benjamin realized that the enemy was not speaking to him. God was speaking. He did not want to hear God.

“No!” Benjamin pounded the steering wheel. “I’m done, Lord! Like what am I supposed to do? Survive on unemployment and church donations forever. I got a family to support,” he shouted. He picked up the bottle of Vodka and sniffed it.

“I can’t even drink this junk anymore. Too strong,” Benjamin laid the bottle on the passenger seat floor. Benjamin looked at his phone again and selected Asha’s name in the contact list.

“Benjamin. I called you. Like twice,” Asha picked up on the first ring.

(Note: Please stay tuned for Parts 3 & 4. Thank you so much for reading lovely people!:) )

One thought on “6 o’clock Movements: A Short Story, Part 2”

The Thought Trainer
One Grateful Me
Good Life Detroit