(Hey friends! This guest blog post is by an anonymous source, but I wanted to share her experiences with depression as a Christian. In the Christian community, it can be challenging to talk about mental health. Some Christians feel guilt and shame when they are plagued by depression or anxiety.  They may feel that they are failing God or themselves. Yet, I do not believe anyone should feel that level of shame.  A Christian should feel free to ask for help. He/she can cry to God in prayer and even go to a counselor.  Vulnerability is vital as the roots/causes of the pain must be revealed.  Thus, the work of healing can commence.  Please read the honest thoughts of this sister’s battle. -afrotasticlady) 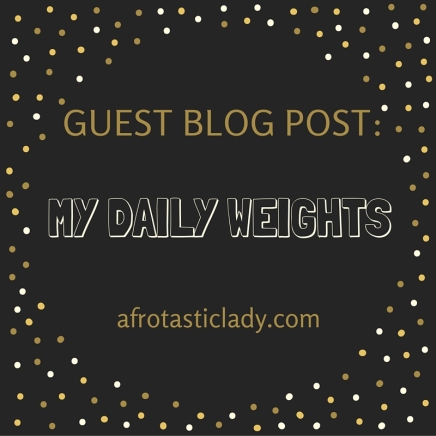 Everyday I wake up, I’m free. I’m breathing in and out regularly.  I’m feeling every inch of my outstretched limbs. My head is clear. My heart is full. For seconds, minutes, and sometimes even hours it’s like this. It’s peace. It’s bliss. Then, a weight gets piled on. One at a time, more and more weights get added to it. Soon, I’m hunched over. My mind is clouded , breath caught in my chest , heart racing. Nothing has to happen, yet it’s like it all happens at once. Everything. All of it. The sadness, anxiety, self-doubt, hatred, anger all of it right there. I don’t ask for it. I don’t want it. I beg it to leave. I plead and bargain asking for just a few more seconds of peace. But it’s never relenting. It doesn’t give up. It seems the more I scream, the further it sinks its claws into me. And I am stuck. Trapped. There’s no tunnel out. There’s no light shining. Just me pushing air out, sucking air in, putting one foot in front of the other as the weights keep piling on. And all I can do is bide my time and wait until the next morning. Wait to start all over again. -Anonymous

(Hey y’all! I am experimenting with different kinds of short stories, and I decided to write a flash fiction story. Usually, a flash fiction story is considered to be anything under 1,000 words.  And please listen to the music video after you have read the story. Thanks!) 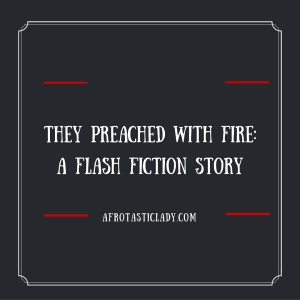 On the second Sunday of the month, Simon preached. He married real talk with humor in his sermons. He was relatable to the young people without being too corny yet he appealed to the older folks with his Old Testament teachings. Simon preached how Daddy used to preach.

Daddy told jokes and left the pulpit so he could see the laughter. The congregation exploded at his jokes like they had watched a scene in an Eddie Murphy movie. Once, the laughter softened and left the sanctuary, Daddy asked the congregation to stand up and open their Bibles. Daddy used to preach so hard that a church nurse would have to wipe his glistening forehead.

Simon was like my Daddy. When the sweat dripped into Simon’s mouth and down into his neck, he wiped his face. The older folks said, “Lord, this boy can preach.” When I heard their words, I tried not to smile. I bit my lips, but they curved. “Miss, your boo is preaching,” the teenagers pointed at me.

As Pentecostal as I was, I liked to be at the church when it was empty. I took my mismatched socks and black Chuck Taylors off. Simon walked to me and softly tugged my nose.

“I’m not smiling.” I placed my hand on my mouth and watched Simon rub his goatee. I loathed this addition to his face before, but I realized that it made him extra handsome. Simon’s almond shaped eyes focused on my bare feet and then my afro. My lion’s mane was getting larger, and I needed to find a patient hairdresser to explore my dense, black curls.

Simon held the ring in front of me, and I looked at it again. I forced myself to examine the simple, golden band. The ring was as simple as my jeans and sneakers

“Thinking? Have you prayed about it?” Simon squinted at me.

“Yeah, I’ve prayed and I don’t have an answer.”

“I’m just confused, Amelia. I thought you wanted to get married. You talked about how you wanted your dad to marry us. You wanted to walk down the aisle with no shoes.”

For two weeks, I ignored Simon’s texts and phone calls. Simon’s handwritten note in my mailbox made me meet with him. Simon’s persistence reminded me of Daddy. Before the divorce, Daddy bribed Mama with fish and chip dinners, so she would take her medicine. He read Bible verses to her during her times in the hospital. Daddy constantly called my Mama’s family to figure out where she was.

Daddy never wanted to divorce Mama, but the church leaders were concerned when his sermons became choppy. His light jokes transformed into snide remarks.

“Simon, you should leave me alone. Find someone who doesn’t have a crazy mama,” I walked over to the pulpit. My back was turned to Simon, but his dress shoes banged towards me. Simon pulled a strand of my hair and stared at me.

“You’d want your mom to be at the wedding too. It makes sense. She’s not crazy though. Just going through some stuff now.”

“Yeah, I wanna marry you. But don’t talk about your mom like that. I don’t think she wants to deal with all of the confusion in her head. I wouldn’t want to,” Simon shook his head.

“Amelia, its fine. I’ll take it on. I believe that God heals and restores. I pray for you and your family. All the time.”

“Goodness. You’re such a preacher, Simon.”

“Hope so. I’m spending a lot of money on seminary,” Simon laughed. He pulled my face towards him and kissed my cheek. Daddy used to kiss Mama when she carried on. Daddy sung to her, off key. His ragged notes covered the tears he would not allow to pour out.

Simon was a singing preacher. I joked with Simon, because he and Daddy didn’t have a lot of differences except the singing. The older folks at our church talked about Simon’s anointing. His voice directed the congregation to praise God. Our own raw voices and our spinning bodies moved into the aisles. After such services, both the teenagers and older folks saluted Simon or shook his dark, brown hand. But Simon pointed at the ceiling and stated, “It’s God.”

I didn’t want Simon to have to leave the ministry. When Daddy told me that the church leaders asked him to stop preaching, he didn’t cry or yell. He guzzled creamy coffee in the kitchen of the house that I was raised in. Then, he dipped a ginger snap in his cup and asked me if he should get something for Mama for her birthday.

Simon kissed my cheek again, and I twitched. Simon frowned, and he dropped his hands into the pockets of his wine colored slacks.

The thought trainer
One Grateful Me
Good Life Detroit